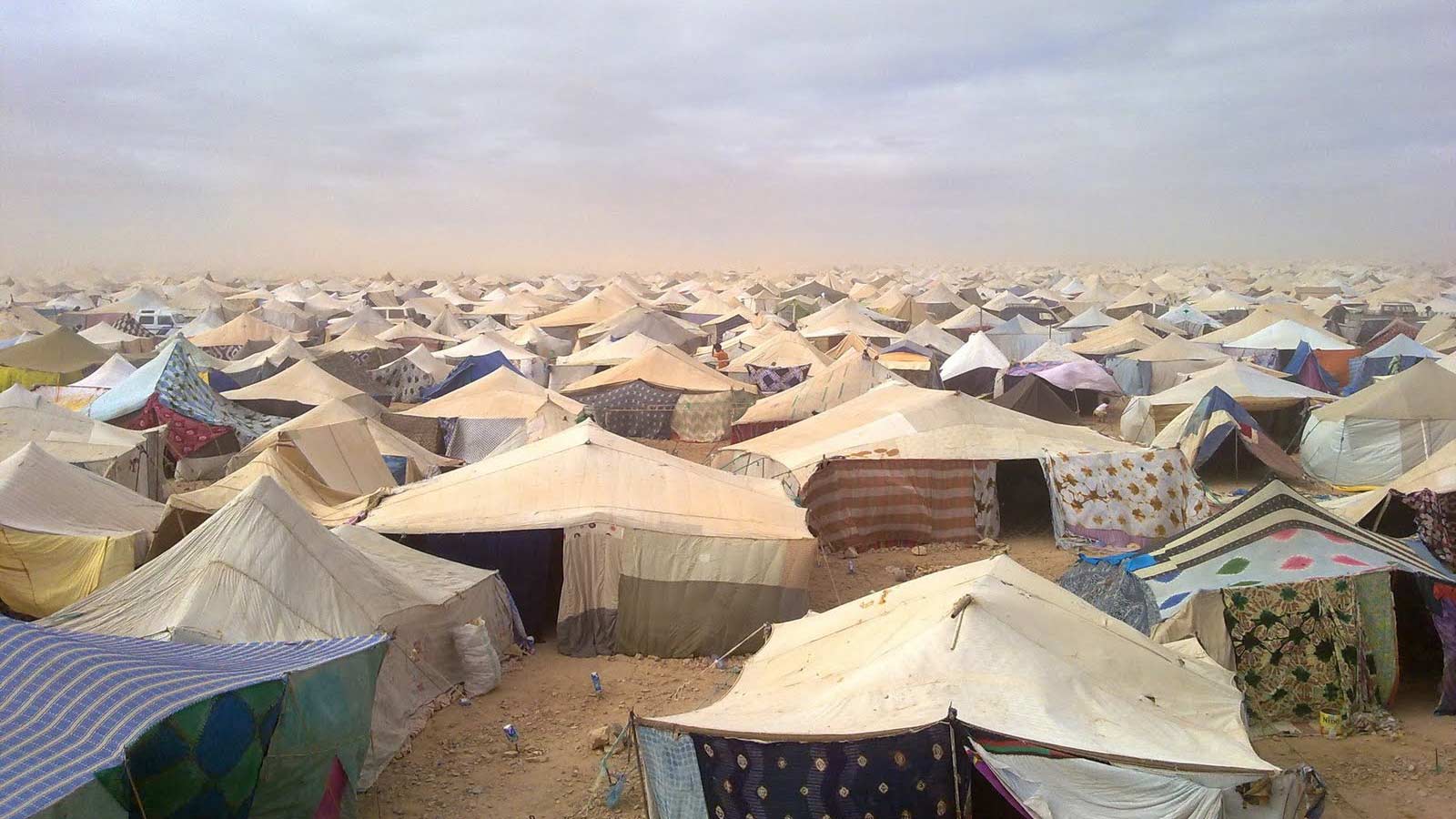 10 years have passed since on October 8, 2010, a small group of Saharawi citizens in the occupied territories of Western Sahara erected their tents in the desert approximately 13 km from El Aaiun, capital of Western Sahara, in a place called Gdeim Izik.

10 years after this cry for help and alert to the international community, nothing has changed. Guterres, Secretary-General of the United Nations, who likes to be seen as one of the engines of East Timor’s independence, does nothing for the Saharawi, ignoring the more than five dozen UN resolutions that have never been put into practice and that advocate self-determination of the Saharawi people, as is their legitimate right.

Ten years passed we have seen in recent days a siege and fierce persecution of the Saharawi population by the Moroccan illegal occupier. The situation has become so untenable that Saharawi say “we live in a concentration camp!”

In addition to the ferocious persecution of the Saharawi in the occupied territories, we also witness a new non-violent protest, this time on the Saharawi side, in El Guergarat. Moroccan occupation authorities have opened an illegal breach in this place, which essentially serves for the passage of looted natural resources in Western Sahara and for drug trafficking whose profits are shared between Morocco and the Sahel terror groups. (On why the Saharawis are organising a sit-in camp in El Gargarat area)

Hundreds of Saharawi are setting up camp in El Guergarat from refugee camps, Mauritania and liberated territories. Today as ten years ago they shout “ENOUGH!”. 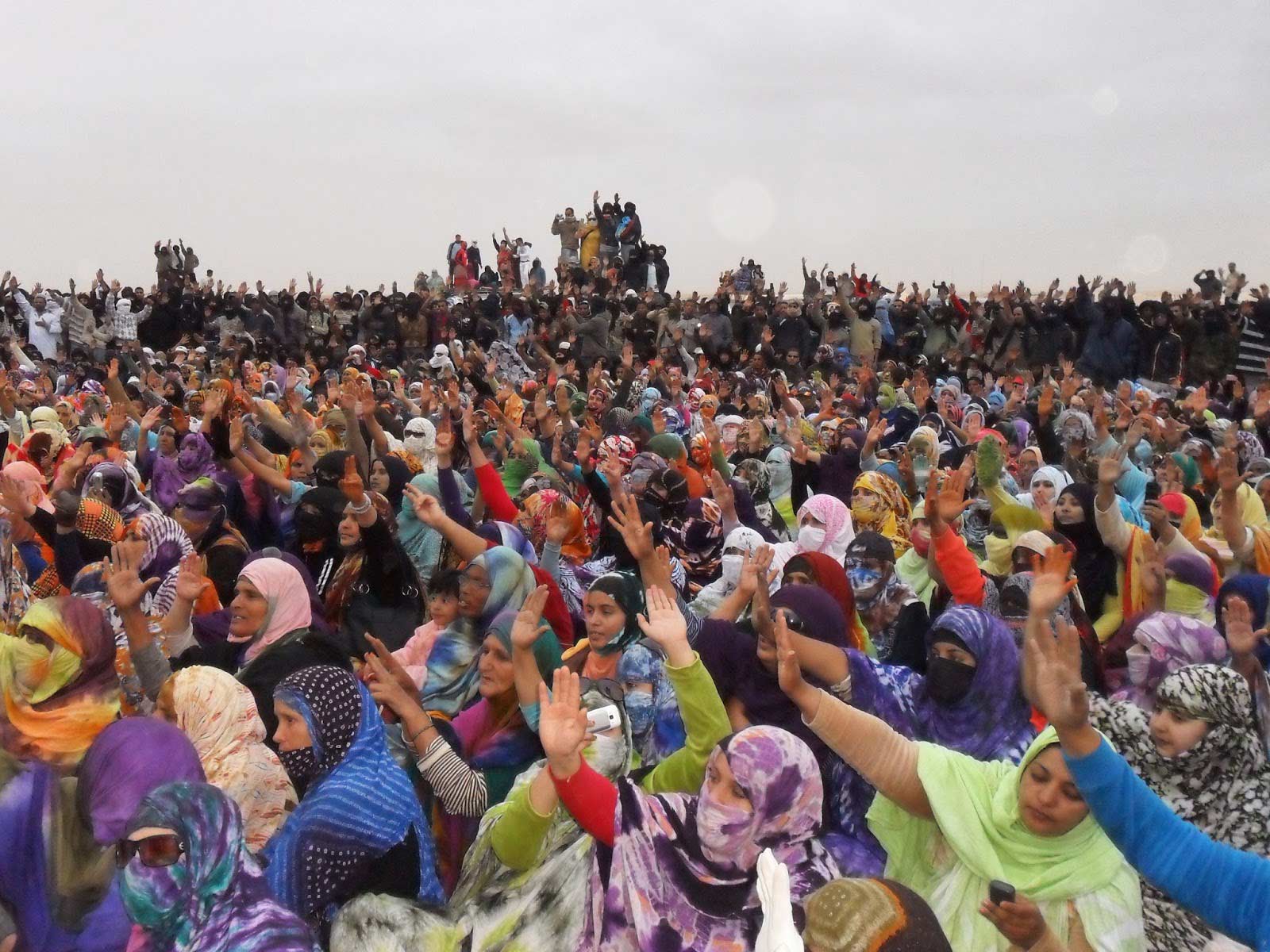 Today, ten years later, Morocco continues to torture political prisoners, continues to make farse trials, persecuting all those who fight and defend in a non-violent way their right enshrined in international law.

Today, ten years later, we are only a few days away from yet another meeting of the Security Council (SC) that will once again debate the extension of MINURSO’s mandate, a mandate that has not been fulfilled since its creation in 1991 due to the obstacles imposed by Morocco and the unconditional support of France, a permanent member of the SC.

These are endless promises, endless years of waiting and suffering. How can we believe in an organization that sends a peace mission that does not protect us and that spends time at the beach, in hotels, in bars, in cafes? United Nations officials who see our suffering and do nothing? How can we believe in countries like France that say  that they are the homeland of human rights but opposes the inclusion of human rights in MINURSO’s mandate? How can they be against the protection of a defenseless population?? “What are their arguments? What are they afraid of? Moroccans will never let us do the referendum, they are afraid! But don’t think that we will surrender! Every day that passes we are more united and we will be free with or without international help!”

What was Gdeim Izik

On October 8, 2010, a small group of Saharawi citizens in the occupied territories of Western Sahara erected their tents in the desert approximately 13 km from El Aaiun, capital of Western Sahara, in a place called Gdeim Izik.

This action, which was a sign of protest, had a clear message: enough!

No more brutal occupation, economic, social and political apartheid that translates into forced impoverishment, unemployment, racism, lack of basic freedom and no respect for human rights by the Moroccan occupation.

This handful of tents and men quickly were  joined by thousands of men, women, children, elderly, all eager to protest in a non-violent manner and, at the same time, live together in their tents as Saharawi have lived for centuries. The tent is one of the maximum expressions of their identity and is prohibited by the Moroccan occupation authorities.

The huge camp was filled with Saharawi from all over occupied Western Sahara.

The Gdeim Izik camp was their way of asking for help from the world, demanding respect for their most basic human, social and economic rights. A cry directed at the same world that has intentionally ignored the situation of the Saharawi people since 1975 and who is watching in silence the slow genocide of this people.

But nobody moved. MINURSO (United Nations Peace Mission in Western Sahara) stood motionless without lifting a finger to protect the tens of thousands of Saharawi.

On October 12, armed trucks, helicopters and military vehicles started circulating in the camp area and building road blocks and control points around the camp.

Later, a sand wall was built around the camp, so that the Saharawi were again under total control and siege.

On October 24, the Moroccan army opened fire on a vehicle trying to enter the camp with food. Nayem Elgarhi, a 14-year-old Saharawi child, died on the spot. To this day, the location of Nayem’s burial is unknown. Nayem was buried in secret by the Moroccan authorities, who did not allow the child’s family to see the body or be present at the funeral. No autopsy was carried out on yet another of the hundreds of thousands of deaths of Saharawi who died at the hands of the Moroccan occupation forces. No action was taken by the UN, the world remained silent.

Saharawi demonstrators did not move and remained in Gdeim Izik, although tensions were high. Gdeim Izik’s dialogue committee remained in negotiations with the Moroccan occupation authorities.

On October 26th, both parties agreed to conduct a demonstrator census as a starting point to start allocating some housing and job-related benefits later.

On 6th of November, tents were set up near the camp to start the census on the following Monday, 8th November.

But once again Morocco betrayed what it signed.

In the early hours of November 8th, 2010, the Moroccan military invaded the large Saharawi protest camp. The camp was destroyed, hundreds were arrested and tortured. Saharawi protesters were shot with rubber bullets, gas, batons, water cannons, etc. They had no means of defense.

Protesters were forced to leave the camp on foot, by car or some, by a reduced number of buses requested by the Moroccan army the day before from OCP (phosphate company). At the same time, there were riots on the streets in several cities in Western Sahara. The demonstrators directed their anger at Moroccan symbols. Saharawi began to barricade streets with cement bricks, stones and burning rubber tires. Clashes with security forces and Moroccan settlers erupted.

In the weeks before the collapse of November 8th, Morocco had already prevented foreign politicians, NGOs and the media from accessing the camp, creating a complete blackout. However, the filming was done by Saharawi and António Velasquez (Mexican) and Isabel Terraza (Spanish), who were hiding inside the camp and then several weeks in El Aaiun, fearing for their life.

During and after November 8, 2010, many Saharawi were arrested and detained for much longer than the maximum time that anyone can be held without being charged, according to the Moroccan penal code. They ended up on probation over time, often after spending months in prison without any official charges against them and suffering horrendous torture. However, a group of 24 men remained in prison and were transferred to Rabat for investigation by a military court, their first trial in 2013.

The trial was considered null by the international community and, due to pressure Morocco carried out a second trial in a civil court in 2016/2017, 19 of these men remain in prison, with sentences ranging from 20 years to life imprisonment (see the report here: https: //es.scribd.com/document/366418567/The-Gdeim-Izik-Case).

Throughout the protest period, MINURSO, the United Nations Mission on the ground, passed through the camp daily, saw what was happening, saw the siege and threat to the civilian population and the attack by Moroccan forces. All of this is a clear violation of the 1991 ceasefire agreement between Morocco and the Polisario Front. MINURSO, however, remained silent and inactive.

Ten years have passed, the prisoners of Gdeim Izik are still being tortured and imprisoned. Their families suffer reprisals. The situation in occupied Western Sahara is as bad or worse than before.