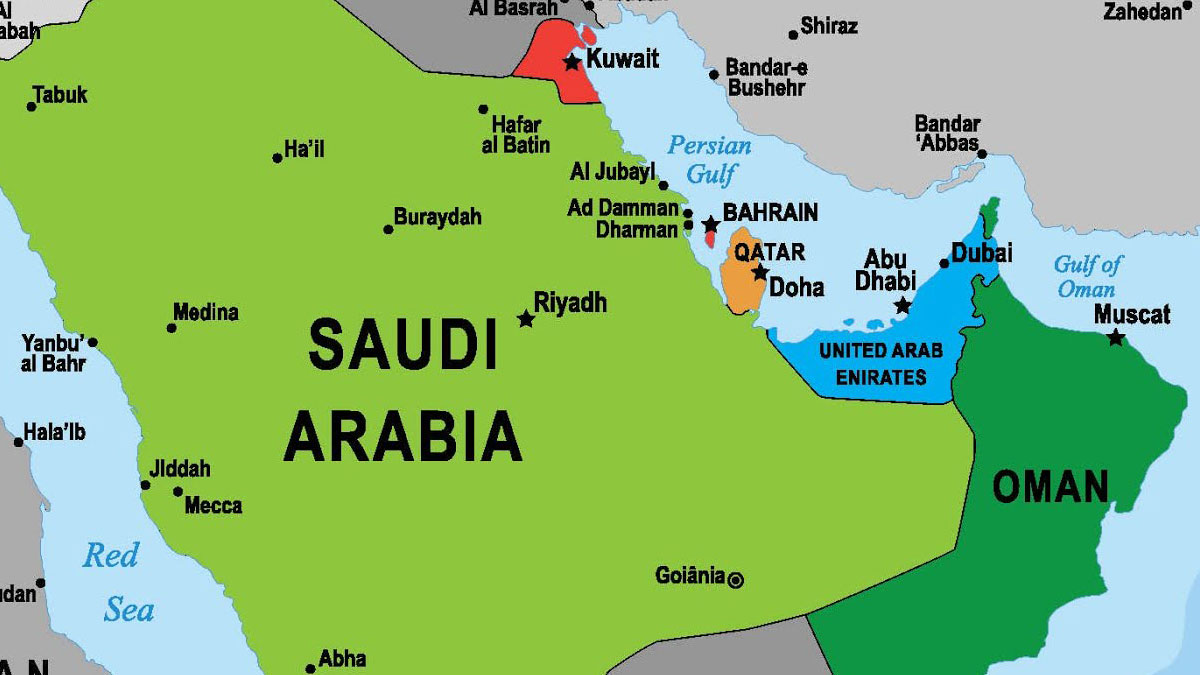 Waking Up to Reality in the Middle East

Thursday, August 13 the Trump administration released a series of breathless communiques proclaiming the onset of formal peace and diplomatic recognition between Israel and the United Arab Emirates. Shortly thereafter the Israeli government of Prime Minister Benjamin Netanyahu echoed the American releases in both substance and theme. The Emirati leader, Sheikh Khalifa bin Zayed bin Sultan Al Nahyan, was far less…gushy in his own announcement, but critically contradicted nothing stated by Trump or Netanyahu.

Waitaminute! Don’t the Arabs hate Israel? Why in the world would a rich Arab statelet on the far side of the Arabian Peninsula want to exchange ambassadors with the Zionists??

It isn’t so much that the Emiratis don’t care about the Palestinians any longer (although they really, really don’t), and instead it is bound up with the rapidly simplifying American position in the Middle East. The Americans have nearly completed their pullout from the overall region, and the Emiratis are hoping to get ahead of their rapidly disintegrating geopolitical environment.

In the aftermath of World War II, the Americans crafted the global Order to bribe up an alliance to fight the Soviets. Part of that was funding rebuilding, financing the construction of industrial plant, and enabling the Europeans and East Asians to access the American consumer market. All that required oil, and that oil for the most part came from the Middle East. And so, the Americans went to the Middle East.

We are now thirty years after the Soviet collapse. Americans are done managing the world, and the Americans are especially done managing the Middle East. They’re going home. Troop rotations have outnumbered permanent deployments in-region for years. The Iraqi deployment is quickly approaching zero. The Syrian deployment is no longer more than a rounding error. Only Afghanistan remains as a meaningful deployment, and it is a deployment few Americans want to continue. The naval base in Bahrain and CENTCOM’s operations center in Qatar only continue existing to service the Afghan deployment. And that’s…all of it.

From the United Arab Emirates’ point of view this is an unmitigated disaster. The UAE (and their fellow Gulf states of Kuwait, Saudi Arabia, Oman, Bahrain and Qatar) don’t care what US troops do in the Middle East or how many locals they kill or how many US troops die at the locals’ hands. They simply want the Americans present – both regionally and around the world. So long as the global superpower is active, the Gulfies don’t have to worry about guarding the production, processing, and exporting infrastructure for their oil and natural gas. So long as the Americans are globally engaged and guaranteeing freedom of the seas for all, the Gulfies know their hydrocarbon exports will safely arrive at their customers’ ports. National safety and national bank. For them, it’s that simple.

Those heady days are over. America’s withdrawal from the wider world has been a longer running development than its Middle Eastern wrap-ups. It, too, is now multiple presidential administrations underway. Total US force deployments globally are at the lowest level since before the Great Depression, and still trending down.

For the Emiratis in specific and the Gulfies in general, the Americans’ past-the-point-of-no-return departure conjures up multiple, reinforcing disasters.

Unlike many who have a finger in the world of national security, I’ve never found Iran to be strategically threatening.

Iran’s army is designed to oppress its own population, not march on its neighbors. Its air force hasn’t been updated since the fall of the shah in 1979, and the Iranians are running out of jets to fall out of the sky. It’s navy…well, it doesn’t have a navy. It has a bunch of speedboats. Should Iran march on the Gulf states, it would face four challenges:

First, its army would have to march. It isn’t motorized. Second, it would have to first march through its own region of Khuzestan – a region populated by restive minorities. Third, it would have to cross a pontoon bridge into Basra, Iraq’s second-largest city. A high-school science experiment could take out the bridge, while needing to pacify Basra’s two-million-strong population at the beginning of an invasion’s supply line would about as much fun for the Iranians as it was for the Americans when they conquered/liberated Iraq in 2003. Finally, there’s a blistering six hundred miles of completely empty desert between the Kuwaiti border and any meaningful infrastructure in Saudi Arabia. That’s a loooooong walk.

Yet as unimpressed as I am by the Iranian military, it is the freakin’ Roman Legion compared to the militaries of the Gulf states. The Gulfies are beyond military incompetent because they’ve never had to be competent. Sure, the Emiratis and Saudis are getting some good target practice for their air forces in Yemen, but their armies are largely paperweights and none of them have a navy that’s more than a coast guard. Not only have all depended upon the Americans to do their fighting for them, most consider a functional domestic military a potential threat to the ruling dynasties.

All the Gulfies ship in vast swathes of workers, to the point that over 70% of the “populations” of Kuwait, Qatar and the UAE are imported labor. This isn’t like Western Europe or the United States where the migrants do jobs the locals don’t want. In the Gulf states, the migrants do everything. The migrants are not allowed to bring their families or own property, and as soon as the migrant men lose the ability to carry their own weight or the women lose their looks, they are rooted out and sent packing. They are regularly the target of every assault imaginable, including sexual assault.

In the United states, we have a word for that: slavery.

Treat this many people this badly, and only the existence of a wildly intrusive and brutal and unfettered internal security service can maintain domestic control for the ruling dynasties. As much of a threat as Iran is, the day-to-day internal pressures of the Gulf states are far more likely to end them.

Many make light of the fact that the actual citizens of the Gulf states could be a risk as well. After all, they are used to cradle-to-grave support for everything from food to rent to hookah bars. The idea being, that should social spending falter, the locals might rise up against their rulers.

While I don’t quite dismiss this concern out of hand, I’m not all that worried. The Gulf states in general – and the UAE in particular – have addressed this problem by helping their peoples consume as many saturated fats as possible to make them as unhealthy as possible. The idea being that overweight people laden with heart disease who can only get around on scooters aren’t the type to leave their air-conditioned compounds to riot in the desert sun. Pampered corpulence as a national security strategy might sound odd, but it works for the most part. Therefore, I am – and the local governments are – more watchful of the larger, younger, healthier, angrier and institutionally abused slave class.

The only way this system is sustainable is if the money from hydrocarbon sales keeps flowing in and whoever guarantees Gulf state security turns a blind eye. The Americans are leaving, endangering both the income flows and the political cover.

Key thing to keep in mind when considering the United States in the Middle East: the US was primarily interested in Middle East oil for its alliance network, not for itself. Historically, the United States has gotten nearly all its crude from its own territories or its North American neighbors, plus Venezuela. With America’s shale revolution now mid-way through its second decade, technically, it is already independent. Its need for Middle Eastern oil has gone from minor to nearly nonexistent.

Not so for…pretty much anyone else. Despite all the Green rhetoric on wind, solar and the like, combined they still generate only about 2% of the world’s total energy needs. Oil and natural gas clock in at more than half. And for most of the world, it must be imported. From the Persian Gulf.

Outside powers who have been dependent upon the Americans to maintain energy flows can do the math. Outside powers who have navies can do it faster. The first time there’s a real energy crisis anywhere in the world after the Americans have left the Middle East, we’re going to see some records broken for sailing times from the United Kingdom, France, India and Japan to the Persian Gulf.

Note: China can only play in the Persian Gulf if the United States makes the Pacific and Indian Oceans safe operating zones for the Chinese navy. The Chinese navy only has a handful of ships that can sail beyond the First Island Chain. The operative word is “sail”. It is almost certain they cannot fight their way much past the Chain, much less operate five thousand miles beyond it in the Middle East. China simply is not an expeditionary power, and is a non-power in the Persian Gulf.

The Gulfies might not like the Americans very much, but the Americans have had a vested interest in the Gulf states remaining independent and making boatloads of money by selling their hydrocarbons. For the locals it was a sweet deal. Any post-American power that comes to the Gulf is unlikely to be nearly as…understanding.

So, what does this all have to do with a normalization of relations deal between the UAE and Israel. Simply put, the Emiratis (really, all the Gulfies) know the Americans are leaving and they are massively – hysterically – unable to look out for their own interests in the world that’s coming. Between the threats of Iran, their own populations and extra-regional powers, none of them are long for this world.

Banding together is off the table. As much as the Gulf states dislike Iran, they like one another even less. These are not countries. They are dynasties. It is as if each of the Kardashian sisters ran her own kingdom. (The GCC – for those of you who follow the region enough to know what that is – is nothing more than the Saudi attempt to force everyone to do things their way.). The Gulfies trust – they all trust – Israel more than one another.

To call Thursday’s agreement a peace deal is a rhetorical flourish. A bit of PR flim-flamery. The UAE and Israel were not at war. Israeli military planners didn’t lose much sleep thinking about Emirati-backed militant cells in Palestine or Syria or Lebanon targeting their populations, much less a conventional Emirati military attack. Thursday’s announcement was more about a public acknowledgement of cold, hard, geopolitical reality: the issue isn’t an Israel-Arab divide being healed, much less one of Jewish-Islamic ecumenical healing. The difference hasn’t been that broad is decades.

Rather, it is about an American security dependent heeding the writing on the wall. Of wanting to (of having to) protect their interests (their existence) without the promise (or hope) of American intervention. The Emiratis are worried about Tehran. About Tokyo. About Paris. About New Delhi. About London. (About Riyadh.)

The real kicker? This diplomatic normalization is only the first step. In time the UAE – indeed, each of the Gulf states – will need to partner with an outside power if they are to survive the predations of the others. Kudos to the Emiratis for the first-mover advantage. They’ve not only gained themselves a diplomatic, political, intelligence and military partner, they’ve broken the ice and made it a bit easier to stomach partnering with a true infidel.

Time will tell if it is enough.