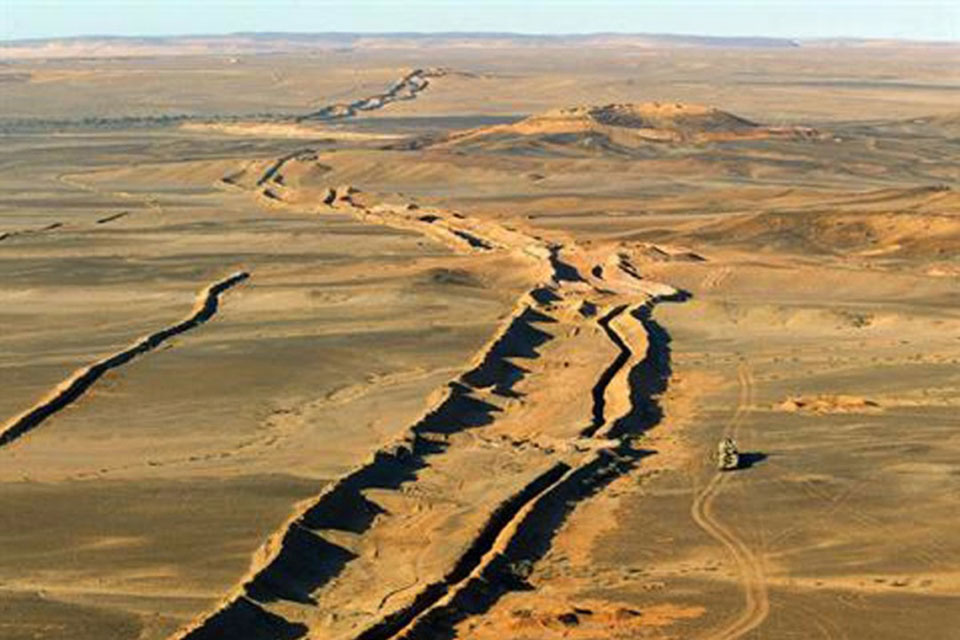 Since the construction of the Great Wall by the Chinese between the 3rd and 17th centuries, never had men gone to so much trouble to erect such an artificial barrier 2720 kilometers long. 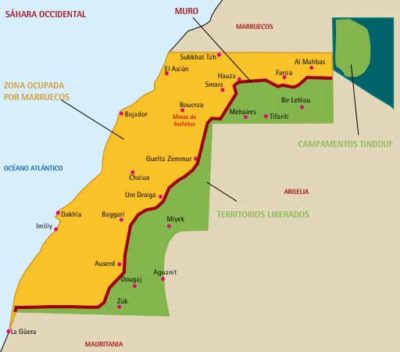 The “sand wall”, also called “the wall of shame” is the longest of the modern era. It runs from Lebaaj in the southeast of the Moroccan border, to El Guerguerat in the Atlantic Ocean in the extreme southwest of Western Sahara, to cut it in two and impose colonial rule.

After three years of war and despite the direct intervention of France at its side, Mauritania withdrew from the southern part of Western Sahara it occupied, thus putting an end to its claims on the southern part of Western Sahara and to its military alliance with Morocco for the illegal occupation of the territory since 1975. Thanks to the good knowledge of the battlefield and the effectiveness of the guerrilla tactics undertaken, the Sahrawis were able for a short time to reach the periphery of the capital of El-Aaiun, sabotage the phosphate conveyor belt in Boucraa which remained inactive for 6 months, liberate several Sahrawi zones and villages and continue to expand the operational scenario up to 500 km inside Morocco then remained alone in the arena of conflict. Morocco, n order to save his army from a resounding defeat, especially after the annihilation of his elite units such as Ouhoud, Zelagha, 3 RIM … etc, the latter appealed to his allies, notably in Tel Aviv, Washington and Paris, which suggested a new military strategy for the conflict: defense through defensive belts (sand walls).

These walls were mainly aimed at protecting the Moroccan army, towns and sensitive areas, creating a concentration of forces and delaying any attempt at Sahrawi offensive, leaving time for an adequate response but also to deprive the Sahrawi army any tactical advantages offered by the surprise factor, to separate and cut off all communication between the Sahrawi on both sides of the wall and finally to guarantee the usurpation of natural resources and the establishment of Moroccan settlers.

This line of military “defense”, erected by Morocco thanks to Israeli military experts, French and American advisers and generous funding from Saudi Arabia and the Gulf countries, is the result of six successive construction phases from 1980 to 1987.

Its name could evoke a certain fragility, but the wall is a fortification of sand or stone embankments, double or triple, with a height of 2.5 m and a depth of 1.5 m. It stretches along high topographic points (like peaks and mountains), protected by bunkers, ditches, anti-tank trenches, barbed wire and littered with 8 to 10 million landmines, which make Western Sahara one of the most mined areas in the world. The wall is monitored by electronic detection systems (radar) and guarded by more than 120,000 Moroccan soldiers equipped with sophisticated weaponry.

The Moroccan occupation forces deployed to the wall in Western Sahara represent a significant part of the royal Moroccan army, they are distributed from north to south in three large sectors (Oued Draa, Saguia el Hamra and Oued Edahab). consists of 4 or 5 sub-sectors which bear the geographical names of the regions of their locations. The structure of the wall is generally made up of two lines of defense: The first is formed by a series of support points and observation points which are guarded by sector infantry units and the second line of defense where rapid response units are deployed.

Fulcrum/Support point (Point d’appui: PA): This is the largest operational tactical unit on the first line of defense of the wall; it extends over a front of 300 to 400 meters in front of which are laid barbed wire and minefields. The depth of the PA is 100-200 meters and usually consists of 100-110 men. The distance between the points of support, also called bases, is about 4 to 5 kilometers. The role of the PA is to thwart, with the rapid intervention forces (FIR) in depth, any attack by the adversary in addition to the daily and usual guard, as well as the maintenance of the entire defensive system.

Point of observation (PO): It is a small tactical unit, subordinate to the Point of support (PA), equipped with almost the same defensive barriers and being on the same line at a distance of 2 to 2.5 km from it. The distance between two observation points is 400-500m. This structure is usually guarded by 30 to 40 soldiers whose mission is to monitor the day-to-day situation of the obstacle system on its front, such as examining the state of minefields and detecting possible infiltrations, among others.

Rapid intervention forces: They are generally made up of armored squadrons (tanks), mechanized infantry regiments and artillery groups, at a distance of 6 to 8 km from the first line where the ( PA) and the (PO)  are and with whom they coordinate responses to threats. While the command posts are behind the rapid response troops, in secure, highly fortified and strategic locations. Aerial coverage for the wall is also guaranteed from air bases in the occupied towns of El Aaiun, Dakhla and other towns in southern Morocco.

The first consequence of this separation wall is the physical division of the Saharawi people, between those who fled the bombings and the massacres of the Moroccan army, to live in refugee camps in the south of Algeria, free, but far away from their homes and in difficult conditions, and those living in the occupied territories, under fierce occupation, exposed to all kinds of repression and violation of human rights.

In addition to the segregation of the local population, the dismemberment of families and the psychological and social effects that ensue, there is the problem of landmine victims who are often innocent civilians, injured or killed. For the construction of these walls, Moroccan forces uprooted thousands of trees in adjacent areas and irrationally exploited local materials (wood, sand, stone, etc.). Moroccan soldiers have engaged in the wild hunting of some rare local animals. They also banned people from using the few adjacent water sources or grazing their herds nearby.

The involvement of high-ranking Moroccan forces stationed at the wall, in the smuggling of prohibited goods, illegal immigration and trafficking in cannabis resin, (hashish) has been proven through several reports and events, which constitutes a threat. for the safety of the whole region. The Moroccan wall also serves as a cover for the daily state of siege in the occupied Sahrawi cities, the extermination of the Sahrawi, the implantation of Moroccan settlers and the plundering of the natural resources of Western Sahara, which has thus become a large prison isolated from the outside world. The persistence of this little-known wall contaminates the environment, threatens the human and urban development of the territory and represents a challenge to self-determination and peace.

Despite the untold suffering inflicted on the civilian population and the negative effects caused by this wall, which flagrantly violates all fundamental human rights (Articles 23-52-53 of the Fourth Geneva Convention), the international community ignores it, does not condemn it and remains indifferent to the construction and maintenance of these walls as well as to the persistence of their maintenance and their continuous strengthening with weapons and military equipment thanks to the funding granted to Morocco by international institutions such as the Union European Union (EU) to fight poverty and illegal immigration.

The absence of condemnation and impunity and the support of certain powers in the Security Council encouraged Morocco in its rebellion against international legality. This irresponsible behavior was manifested in November 2020 by the violation of the ceasefire in force for 30 years and the construction of a new 50 km separation wall in the El Guergarat area, under the passive watch of MINURSO. (UN mission for the organization of the referendum in Western Sahara).

However, it is important to note that over time this “defensive” system of walls became ineffective, especially when the Saharawi army gradually adapted in the 1980s to new tactics through the war of attrition. (harassment, infiltration, assaults, ambushes, etc.), which allowed the Sahrawi combatants to carry out major offensives, which targeted the Moroccan walls during the years 1984-1989. Successive attacks on the Wall of Shame have demonstrated its tactical-combat vulnerability. The war of attrition has generated, in addition to material and personal damage, a climate of psychological instability and permanent tension between the Moroccan soldiers, for the simple reason that they do not know when, how and where they will be attacked. which accentuated phenomena such as desertion, fights, assassinations, insubordination, drug consumption, etc. These phenomena are typical of a demoralized army.

Morocco realized that its static, semi-linear defense system strategy dispersed Moroccan forces over a front more than 2,720 km long, resulting in the loss of all offensive initiative for the sole purpose of maintain their defensive positions. Add to this the very expensive maintenance cost of these walls (2 million euros per day) that the fragile Moroccan economy was unable to bear, despite the support of its allies and the money it received from Gulf countries which were financing its war in Western Sahara, and which were beginning in this period to get bogged down in their own problems.

It was clear to the King of Morocco Hassan II that he could not resolve the conflict by military force, so he accepted the UN peace project in order to start negotiations and a ceasefire agreement with the Polisario on September 6, 1991.

After the collapse of the peace process at the end of 2020, the Sahrawi who placed their trust in the international community and endured decades of waiting in order to exploit all peaceful avenues, were forced to take up arms again to defend their legitimate rights. We are preparing for a second phase of the liberation war. Despite the imbalance of forces, Morocco was not able to defeat the Saharawi and annex territory by military force before the 1991 ceasefire. We rely above all on the justice of our cause, the will to sacrifice, the morale of our combatants and the good knowledge of the battlefield, in addition to their experience and the initiative of the attack and the use of revolutionary war and attrition tactics, against the royal Moroccan occupation army, which shelters itself behind fragile walls scattered in a vast territory which is foreign to it.