Occupied Western Sahara: the deafening silence of the UN 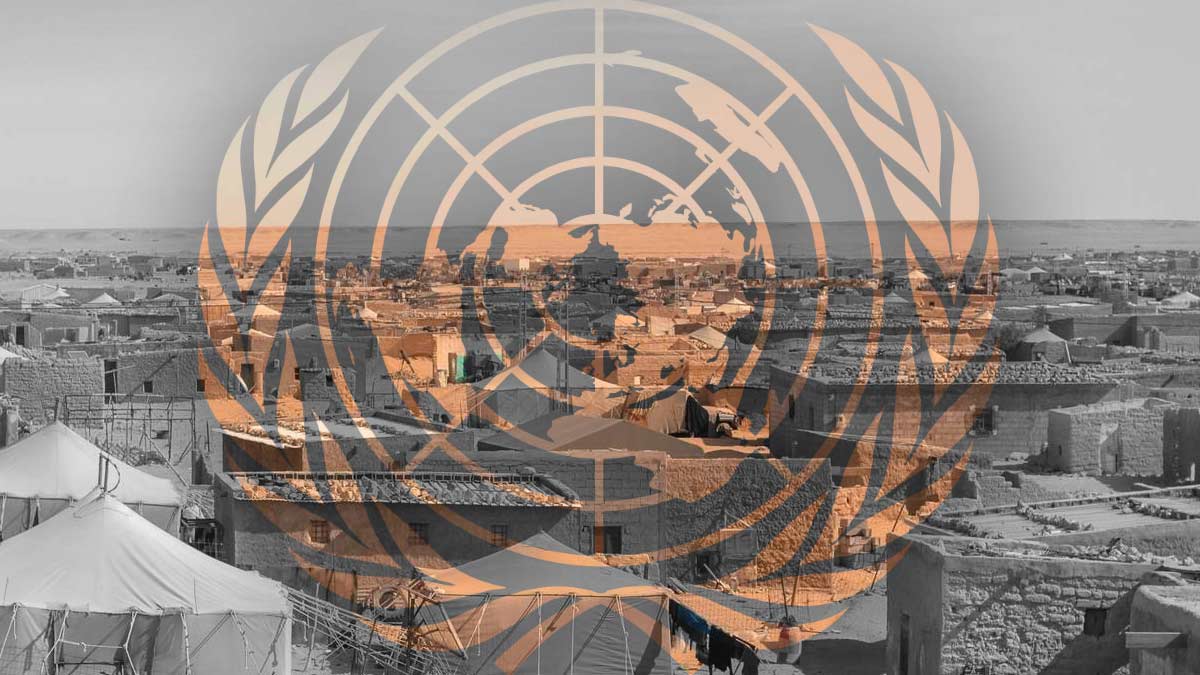 UN, deafening silence and the absence of international institutions in occupied Western Sahara

In the search for data from the various UN organizations such as UNESCO and UNICEF, a total absence of them is present when it comes to the occupied territories of Western Sahara, a non-autonomous territory that awaits decolonization.

When we consult the various Human Rights mechanisms and the Committee for decolonization, the results are not much better, although there is apparently less silence.

In fact, since the Moroccan invasion in November 1975, there have been few visits by the United Nations and its mechanisms to the occupied territories. The Saharaei population has been abandoned the to whims of the Moroccan occupier. The presence of the United Nations Mission for the Referendum in Western Sahara (MINURSO) since 1991 in the territory does not bring any benefit to the Saharawi population, since this Mission saw the removal of its components necessary to protect the Saharawi from continuous violations of their human rights and physical integrity perpetuated by the Kingdom of Morocco.

Thus, the Committee for Decolonization, known as the Committee of 24, only visited the territory in May 1975 before the invasion still with the presence and de facto administration of Spain, the territory being the province 53 of Spain (https: // porunsaharalibre.org/informe-de-la-mision-visitadora-de-las-naciones-unidas-al-sahara-espanol/). The visit took place 12 years after in 1963 the UN Special Committee on Decolonization declared Western Sahara a “non-autonomous territory to be decolonized”, according to General Assembly resolution 1514 (XV) of December 14, 1960.

To this day, the committee has not returned to Western Sahara, a non-autonomous territory on the decolonization list and is limited to listening to the “petitioners” of both parties in an annual ritual that has no practical effect. In October 2017, I participated in the session of this Committee and called for the fulfillment of its mandate, namely the visit to the occupied territories

In 57 years, only one visit was made, not even after the 1991 ceasefire did the committee see it relevant to update its information locally.

What is the reason for the Committee of 24 not to visit Western Sahara? 45 years have passed since their report and there has been no follow-up on the ground, which is unbelievable and an indicator of the United Nations’ lack of credible action to end this conflict.

In fact, this lack of action helps to procrastinate the conflict.

UNESCO simply ignores Western Sahara, despite having a page where Western Sahara appears, all data is blank (see here http://uis.unesco.org/en/country/eh?theme=education-and-literacy ). Audrey Azoulay, Director-General of UNESCO, is a French citizen, a country that unconditionally supports the Mohamed VI regime and in its capacity as a permanent member of the United Nations Security Council has consistently prevented the inclusion of the human rights component in the mandate from MINURSO.

UNICEF also has no data on the occupied territories, nor is it present in them. The data that comes up always refers to Saharawi living in refugee camps near Tindouf, Algeria where they collaborate with the Polisario Front and the Saharawi Arab Democratic Republic.

The successive personal envoys of the UN Secretaries General to Western Sahara, for more than 4 decades have avoided visiting or are prevented by Morocco from visiting the occupied territories. With the exception of personal envoys Christopher Ross in 2013 with violent repression against the Saharawi; and Horst Koehler in 2018, the latter chose not to mention in his statements the massive demonstrations for the independence of the Saharawi population and the consequent repression by the Moroccan occupation forces during his “visit”.

Repression by the Moroccan occupation forces during the Horst Koehler visit

The Office of the United Nations High Commissioner for Human Rights (OHCHR) sent in 2006 a technical commission that produced a report in which the conclusion is clear: all human rights violations in the occupied territories of Western Sahara are a consequence of the violation of law of the Saharawi people to self-determination.

In April 2015 a second technical visit of the Office of the United Nations High Commissioner for Human Rights (OHCHR) visited the Occupied Territories of Western Sahara to investigate the human rights abuses perpetrated by Morocco. During the visit, the delegation met with several Saharawi human rights organizations. Some of the meetings that took place with Saharawi NGOs were held at the home of the well-known Saharawi activist Aminetu Haidar. The activist’s home was completely surrounded by the Moroccan occupation police who threw stones at the building, including  against the UN vehicle. The UN delegation was able to leave the house and return to the hotel with the intervention of MINURSO (United Nations Peace Mission).

During the delegation’s visit, several demonstrations were organized on the streets of El Aaiún to demand respect for human rights, and for MINURSO, the UN mission in Western Sahara, to include the protection of human rights and demanding freedom for Saharawi political prisoners. The demonstrations were violently suppressed by Moroccan forces.

The report of this visit was never published, being closed under lock and key in Geneva.

According to Omeima Abdeslem, representative of the Polisario Front to the United Nations in Geneva, Morocco tried, through visits by mechanisms of the United Nations’ special human rights procedures, to replace real protection of human rights in the occupied territories through the peace mission on the ground, therefor Polisario Front addressed a letter to all special procedures in 2015 requesting that they do not visit the occupied territories invited by Morocco. Indeed, the last visit took place in 2016.

The Saharawi delegate also highlighted the three technical missions of OHCHR in 2014/2015, two to the occupied territories and one to the refugee camps in Tindouf, but regretted that to date no reports have been published.

UN troops are in Western Sahara today under the United Nations Mission for the Referendum in Western Sahara, MINURSO, where they silently watch the criminal acts of the Moroccan occupier: the arrest, torture and massacre of the Saharawi population.

The excuse for “non-interference” and “non-protection” of the population by MINURSO is based on the fact that it does not have a Human Rights component in its mandate. A miserable excuse and which in fact is far from being a “neutral” attitude, on the contrary, it reinforces the Moroccan position and effectively supports the crimes committed against the Saharawi population.

At the opening of the 45th session of the Human Rights Council this month in Geneva, the United Nations High Commissioner for Human Rights, Michelle Bachelet, said she “hopes to discuss” the parameters of a new technical mission to Western Sahara to “identify critical human rights issues “in the territory.

“These missions are vital for identifying critical human rights issues” and contribute to “preventing the escalation of grievances” in occupied Western Sahara, said the UN Chief of Human Rights.

“I look forward to discussing the parameters of a new visit with all parties in the near future,” she said, referring to the critical human rights situation in the occupied territories.

The International Red Cross also has no representation in the occupied territories of Western Sahara. The last visit published on the organization’s official website is from 2001. Several calls have been made to the ICR to visit not only the occupied territories and also the Saharawi political prisoners held in Moroccan prisons, both in Western Sahara and in Morocco without any positive response.

The same applies to the World Health Organization, which does not have a presence in the occupied territories or make visits. If we look at the WHO data on the Covid-19 Pandemic in Western Sahara, no information appears. In the general country information Western Sahara is not on the list.

How is so much silence and absence possible in the last colony of Africa? How is it possible for Morocco to continue with impunity to exterminate the Saharawi people?

UN Visits to occupied territories since 2011

UN Independent Expert in the Field of Cultural Rights

Report: Report of the Independent Expert in the field of cultural rights, Farida Shaheed

Special Rapporteur on torture and other cruel,inhuman or degrading treatment or punishment

Report: Report of the Special Rapporteur on torture and other cruel,inhuman or degrading treatment or punishment, Juan E. Méndez

Special Rapporteur on trafficking in persons, especially women and children

Report: Report of the Working Group on Arbitrary Detention

Special Rapporteur on the right to food

Report: Report of the Special Rapporteur on the right to food on her mission to Morocco

Report: Report of the Independent Expert on human rights and international solidarity on her mission to Morocco

Office of the United Nations High Commissioner for Human Rights (OHCHR) carried out a mission to Rabat, Laayoune and Tindouf between 15 to 23 May 2006

The report was never published by the United Nations, but distributed to the state parties (Morocco and SADR) as well as to the Algerian government.

A copy of the report was published in the website ARSO and republished by porunsaharalibre.org

19 April 2016. Report of the Secretary-General on the situation concerning Western Sahara

10 April 2015. Report of the Secretary-General on the situation concerning Western Sahara