On March 7 at 7 pm, the book SUSPIROS DE IDA Y VUELTA (SIGHS – leaving and returning) written by Isabel Lourenço and Esperanza Jaén, will be presented at the House of Culture of Lebrija, Sevilla. 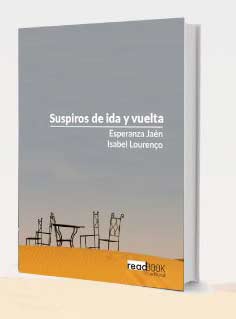 The book can be ordered online at Readbook.es or in bookstores.

When and why did Western Sahara interest you?

How was born the idea of making “SIGHS –  leaving and returning”? What will the reader find in this book?

The book consists of stories that we were both writing at the same time and without knowing about each other. Through a mutual friend (Fito Alvarez Tombo) we found out that we were both writing and sent each other the stories. We were very surprised that although with different styles sometimes, the subject and the way of writing and seeing the situation were very similar. So we decided to join the stories and transform them into a common book.

The reader will find reality. He will not find decorated heroes, or glorified martyrs, what he will find is the flesh, blood, nobility, suffering and dignity of the Saharawi people.

What part of reality and fiction have the stories that are told in this book? How have you documented to write these stories?

The stories are real, the characters have told us directly or we have lived them ourselves, because we have seen them with our eyes. The creation we make in them is to make them closer to the reader so that he feels and lives them.

How do we know who has written each story?

What audience is this book aimed at?

To all who like to read, to all who want to know more about this people, but especially to people who do not know it. We want them to read it and what they think later is something personal, but we want to contribute so that nobody can say that they have not heard what happens with the Saharawi people.

We want to go further and surpass  the circle of friends of the Saharawi People and reach those who do not know the subject. We hope that our readers like the book, that they lend it to their friends, that they give it away as a gift so that the voices of those who do not have it can be heard.

Any other projects together for the near future?

We do not stop, we have many projects, but to have time is another tune. The truth is that there is much more to tell and the protagonists of this book are just a sample of so many with their history and their message. The immediate project is to make the book reach as many people as possible.

Este site usa cookies para melhorar a sua experiência. Vamos supor que esteja de acordo, mas pode optar por não participar, se desejar. Ler mais
Aceitar Recusar Configuração dos Cookie
I consent to the use of following cookies:
Cookie Declaration About Cookies
Necessary (0) Marketing (0) Analytics (0) Preferences (0) Unclassified (0)
Necessary cookies help make a website usable by enabling basic functions like page navigation and access to secure areas of the website. The website cannot function properly without these cookies.
We do not use cookies of this type.
Marketing cookies are used to track visitors across websites. The intention is to display ads that are relevant and engaging for the individual user and thereby more valuable for publishers and third party advertisers.
We do not use cookies of this type.
Analytics cookies help website owners to understand how visitors interact with websites by collecting and reporting information anonymously.
We do not use cookies of this type.
Preference cookies enable a website to remember information that changes the way the website behaves or looks, like your preferred language or the region that you are in.
We do not use cookies of this type.
Unclassified cookies are cookies that we are in the process of classifying, together with the providers of individual cookies.
We do not use cookies of this type.
Cookies são pequenos arquivos de texto que podem ser usados pelos sites para tornar a experiência do utilizador mais eficiente. A lei estabelece que podemos armazenar cookies no seu dispositivo se eles forem estritamente necessários para a operação deste site. Para todos os outros tipos de cookies, precisamos da sua permissão. Este site utiliza diferentes tipos de cookies. Alguns cookies são colocados por serviços de terceiros que aparecem nas nossas páginas.
Cookie Settings
Subscrever Newsletter Tornado