“The Silencing of War” in the UN and the Moroccan Government 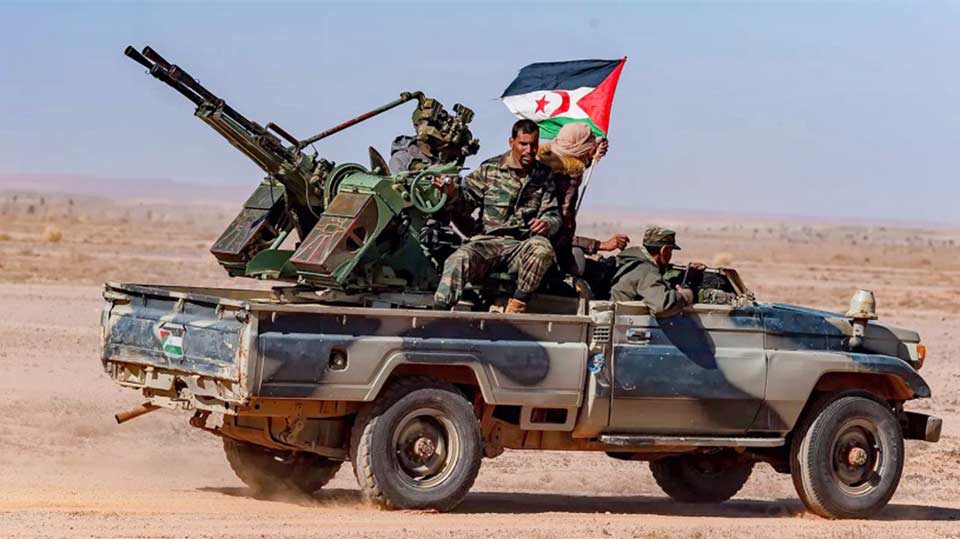 On 13 November 2020 the Kingdom of Morocco invaded the buffer zone in El Guergarat and attacked Saharawi civilians who were peacefully protesting there for an end to Moroccan occupation of part of their territory.

In these 2 months the Saharawi Liberation Army (ELS) has carried out daily bombings and attacks against the bases of the FAR (Royal Armed Forces) along the 2720km long Moroccan military separation wall causing damage with the destruction of radars, armored vehicles, trucks, several bases and headquarters among others according to reports from the Saharawi side.

So far MINURSO (United Nations Mission for the Referendum in Western Sahara) the blue berets contingent in the territory remains present and silent. Indeed, during the conflict in EL Guergarat it was more worried about the passage of trucks through an illegal breach and illegal road built by Morocco than in the presence of Moroccan military in the buffer zone. On the day of the attack, MINURSO, which during the two weeks of protest was present daily, had mysteriously disappeared.

The only statement of the UN SG on the subject was on 13 November, as can be read on the official website of MINURSO (Statement attributable to the Spokesperson for the Secretary-General – on Western Sahara)

In recent days, the United Nations, including the Secretary-General, has been involved in multiple initiatives to avoid an escalation of the situation in the Buffer Strip in the Guerguerat area and to warn against violations of the ceasefire and the serious consequences of any changes to the status quo.

The Secretary-General regrets that these efforts have proved unsuccessful and expresses grave concern regarding the possible consequences of the latest developments.

The Secretary-General remains committed to doing his utmost to avoid the collapse of the ceasefire that has been in place since 6 September 1991 and he is determined to do everything possible to remove all obstacles to the resumption of the political process.

MINURSO is committed to continue implementing its mandate and the Secretary-General calls on the parties to provide full freedom of movement for the Mission in accordance with its mandate.

There are numerous calls from countries and organizations to the United Nations for the resumption of the peace process with concrete measures leading urgently to the self-determination of the Saharawi people in accordance with the dozens of UN resolutions since the 1960s.

The European Union is following in the footsteps of the United Nations and remains silent despite an ongoing war in a territory where dozens of European and other companies are operating illegally as they are in violation of international law, the African Union and the judgments of the Court of Justice of the European Union and do not have the consent of the Saharawi people to exploit resources, trade or agriculture in the territories occupied by Morocco.

Foreign companies have not informed their workers of the end of the ceasefire and the dangers it entails despite the communiqué from the Ministry of Information of the Saharawi Arab Democratic Republic sent by the Polisario Front to all governments on Wednesday 18 November 2020 making an urgent appeal to all countries in the world and to the public and private sectors to refrain from any activity of any kind in the Saharawi Territory which has become a war zone (The Sahrawi Government calls urgently on all countries of the world to refrain from any activity in the National Territory that has become an open war zone).

Morocco denies the resumption of the war through absolute silence despite having mobilized troops, combatants and state-of-the-art military technology to Western Sahara. Foreign journalists are denied entry. The few news reports on the subject in the Moroccan media are fake news and have been denounced by several international media as in an article of Observers.france 24 (Maroc : florilège d’intox autour de l’opération militaire dans le Sahara occidental) where fraudulent Moroccan images, old and from other countries, are seen, even the South African government itself had to publish a denial of statements falsely attributed to it by Morocco (South African Government strongly objects to the “fake news” published by France24.news regarding Western Sahara).

In the meantime saharawi civilians in the occupied territories are victims of a military siege, house invasions, arbitrary arrests, sexual, physical and psychological harassment, attacks and torture, including those of Children (Situation in the Occupied territories of Western Sahara since 13th of November 2020).

Morocco has intensified the media front, produces news, and invests in political marketing through announcements of the opening of consulates of several countries in the occupied territories, which under international law lack any legitimacy. The Kingdom has gone so far as to “sell” its Palestinian “brothers” to make an agreement with former President Trump if he recognizes Morocco’s sovereignty over Western Sahara going against US foreign policy itself. Trump in his uninformed enthusiasm issued a tweet thinking that this would be enough to ignore or perhaps change not only US foreign policy, but also UN resolutions, and ignore US constitutional law and legal procedures. After great paragons in the press and after a visit of US representatives to the occupied territories, there was no inauguration of a consulate and the “matter” was postponed sine die.

The traditional international press is waiting, as seems to be the case with the UN, for Biden to take office to see what he will decide and how to deal with the matter.

In any case it is very clear that the Saharawi are more united than ever and have no intention of stopping the war without the end of the occupation since the International Community and the UN in particular was not able to fulfill its commitments since day one of the brutal Moroccan invasion in 1975 and since the cease-fire agreement in 1991, letting the Saharawi people being victim of a slow genocide.