Thousands of people demonstrated this Saturday in favor of the freedom of Western Sahara, demanding that Spain assume its “historical, legal and moral responsibility” for the decolonization of this territory and put an end to the “torture, repression and plunder of its resources by the illegal occupant which is Morocco.

Western Sahara is a non-autonomous territory pending decolonization that was abandoned by Spain and shamefully handed over to Morocco in 1975.

It was in Madrid, the capital of the country that remains the de jure administrator of Western Sahara, that the March for the Freedom of the Saharawi People ended. 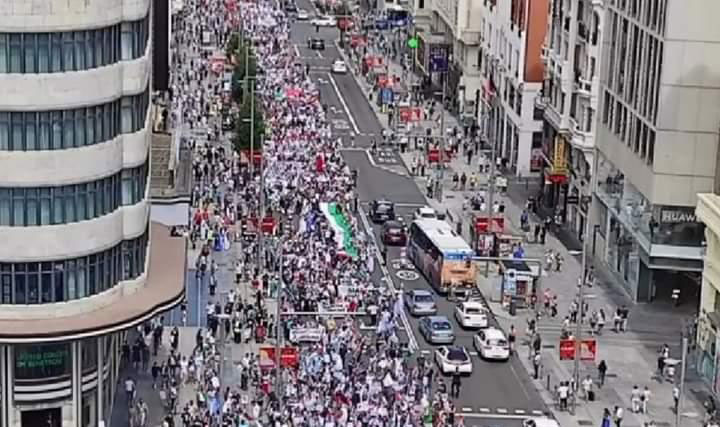 A month ago, marches began in several provinces in Spain, with the support of more than 200 organizations.

This expression of solidarity by people from all over Spain is the expression of a feeling that goes beyond ideologies. It is a cry of the Spanish people, a wake-up call to the world.

This cry for justice must be honored and respected by the Spanish government, the European Union and the United Nations.

As in the case of Timor-Leste, here too it is the people of the de jure colonizer who are clamoring for the freedom of the colonized people.

On 13 November 2020 Morocco violated the ceasefire maintained since 1991, when it attacked Saharawi civilians in the buffer strip of Guergarat, which led the Polisario Front to return to arms after nearly 3 decades of peaceful resistance.

Western Sahara, a former Spanish province, has been divided for more than 45 years, between exile, repression and occupation, without having been given a solution in accordance with the International Law.

Spain, as an administering power, has an obligation, not only to protect the citizens of it, but to facilitate the development of a referendum of self-determination so that the territory ceases to be the last Colony of Africa.

Given the current war situation, caused by the violation of the “ceasefire” by Morocco, and the silence of the Spanish government, and the avoidance and abandonment of its political and historical responsibility since 1975; all this, with the complicity of the UN, who looks the other way while human rights are systematically violated in the area occupied by Morocco.

The associations, groups, organizations and civil society in general, which subscribe to this document, declare the following:

We express our strongest condemnation of the new aggression perpetrated by the Moroccan army against the Saharawi population, as well as our frontal rejection of the unacceptable behavior of the Government of Spain in the face of the worrying events in Western Sahara.

We urge the Spanish Government to fulfill its obligations as a power administrator of the Saharawi territory pending decolonization so that the Saharawi population can access their freedom and independence and, in turn, we demand the Government of Spain the immediate cessation of the sale and donations of weapons to the Moroccan Army.

We denounce the crimes against humanity that Morocco has committed in the Occupied Territories of Western Sahara and the current harassment and brutality with which the Moroccan repressive apparatus treats the civilian population, activists and Sahrawi journalists.

Therefore, we request the urgent intervention of international observers of Human Rights, the International Committee of the Red Cross and the Office of the High Commissioner for UN Human Rights to guarantee the fundamental rights of the Saharawi population.

In this same sense, we request the mediation of the Government of Spain so that the Sahrawi political prisoners, many of whom are unjustly sentenced to between 10 and 30 years, and even life imprisonment, are released as soon as possible.

We also urge Spanish companies to stop their looting activity in Western Sahara, not only because it contravened International Law, but because the only legitimate owner of these resources and their legal representative is the Sahrawi population, whose fundamental rights are being trampled on.

Therefore, we demand from the Government of Spain consistency and firmness in its defense of the International Legality and the support and respect of the legitimate right to liberty of the Saharawi people, as well as the formal recognition of the diplomatic status of the Polisario Front, as sole and legitimate representative of the Sahrawi Arab Democratic Republic.

Through this manifesto, we ask civil society and its organizations to join this march for the freedom of the Saharawi people, for dignity, political and historical debts and, above all, for solidarity between peoples.

China: O início do fim do “pacto do regime”