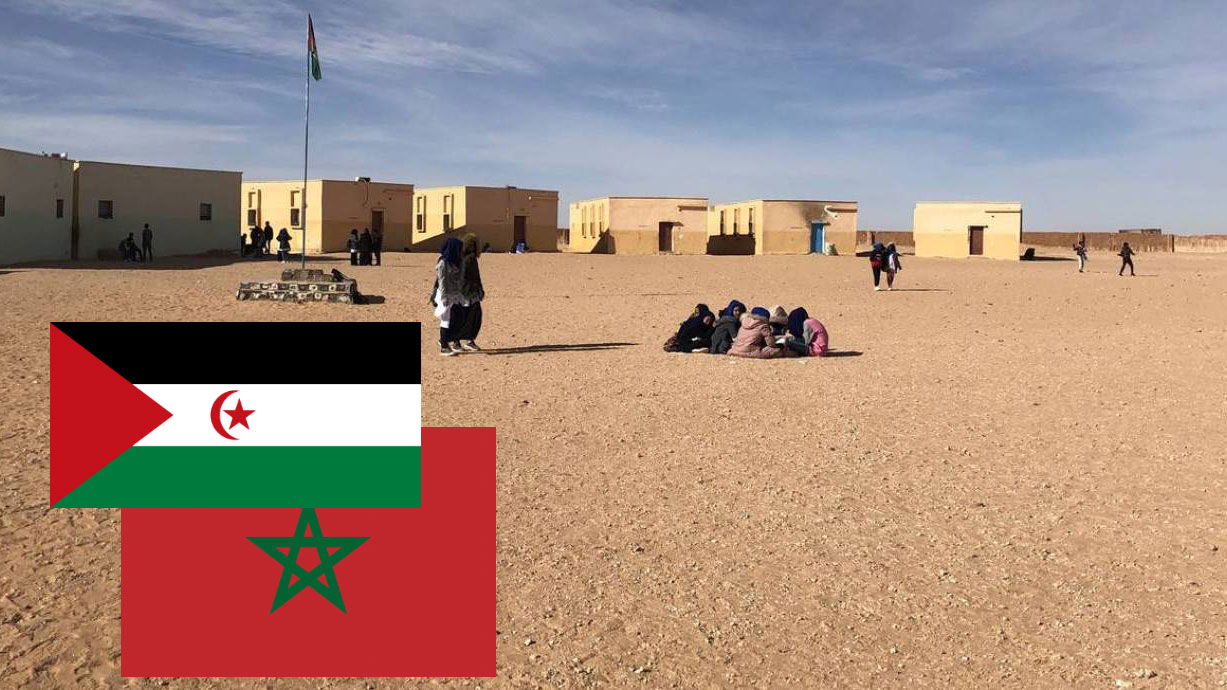 In 1975 Morocco invaded Western Sahara and is up to this day the occupier. Until 1991 a war was waged between Morocco and Polisario Front who defended the right of the Saharawi people to their Country and their independence.

In 1991 a cease fire agreement was signed under the auspices of the United Nations and the African Union with the promise of a referendum for self -determination.  29 years passed and Morocco never uphold its part of the agreement hindering all efforts to implement the referendum which they know they would lose.

The Saharawi population is under occupation in the occupied territories and in exile in the refugee camps and in the diaspora, leaving a small group in the liberated areas of the SADR (Saharawi Arab Democratic Republic).

The UN and the International community seems to be incapable and unwilling to force Morocco to respect what it signed, ignoring the plight of hundreds of thousands of Saharawi who suffer dreadful human rights violations at the hands of the occupier or live in the middle of an inhospitable desert at the mercy of humanitarian aid.

Some Europeans when hearing about the Saharawi conflict ask if there is no Moroccan political party or movement that could defend the Saharawi cause and speak out against this illegal and brutal occupation. In fact. Morocco is very apt at transmitting a complete false image to the outside world who believes that democracy in Morocco is a reality.

For this image to be “believed” Morocco counts with its long-standing ally France, but also Spain, country that is the source of the Saharawi conflict since it withdrew from its colony (Spanish Sahara as it was called) without completing the decolonization process and handing out the Saharawi civilians to be slaughtered by the Moroccan occupier.

The support does not end here, the USA with a different approach, always enabled and supported the occupation with military aid and advise. Morocco has no natural resources worth mentioning and relies on the resources that are illegally exploited in the occupied territories, but its true negotiation power lays in the alliances that it has with the countries who have geopolitical interests and that Morocco is willing to defend, like for instance the occupation of Palestine. Morocco is also the pet ally of NATO and the “influencer” in Africa for its Western Friends.

Bribes, blackmail, and all sorts of “services” provided by Morocco such as the use of black operation sites and prisons for third countries makes it the perfect ally for those who have illegal activities. The idea that Morocco represents the stability of the Maghreb- Sahel region couldn’t be farer from the truth. The financial and logistic support of many of the “terrorist cells” of the region comes directly from Morocco as well as the drug  production and smuggling.

Is it possible to have effective negotiation between the Saharawi and Morocco?

It doesn’t appear to be possible. On the institutional level in the United Nations  the successive string of personal envoys of the various Secretary Generals did not advance one inch to achieve a solution.

But why are negotiations even necessary? Negotiations on what exactly? The negotiations took place in 1991 when the cease fire was signed and the basis of the agreement are clear.

The referendum was accepted on both parts, Morocco however never truly accepted to held the referendum and has brought the situation on this level to a stalemate.

What has to be negotiated? How can you negotiate with someone who has robbed your house, raped and murdered your mother, wife and daughters, and still lives inside that house without any legal action against him and on top of it using the people he robbed, raped and killed to abuse as he likes? How can there be negotiations with an occupier that holds dozens of political prisoners hostages, tortured and kidnapped albeit the United Nations mechanisms decisions?

What is the logic of this?

Over the years the distrust of the Saharawi population has grown from distrust into complete and utter disbelieve in the International Community and its mechanisms. It is not possible to expect trust in a system that sold you out over and over and over while the criminal perpetrator receives respect, holds on to its looting and goes unpunished no matter what psychopathic action he takes.

So, we have on one hand the support of the International Community through its inaction and on the other the Moroccan people who also live under an iron regime. What do we expect the Saharawi people to do? Do we expect them to continue to suffer so that we can write “intelligent texts with a lot of useless and worthless terminology” recalling realpolitik and inserting a lot of expression like “should, would, could” without ever taken action to advocate and truly implement international law? Negotiations? To negotiate you need two willing parties, which is not the case. But as said before, negotiations are not needed since the political solution was already found but unfortunately never implemented.

In recent published videos on Facebook the Saharawi news group “Equipe Media” launched the question : Could dialogue between civil society in both Morocco and Western Sahara served to resolve the conflict over Africa’s last colony and establish peace and stability in the whole region?

Hmad Hammad, vice-president of CODAPSO and the Blogger Moulay Lehssan Duihi gave their opinion on this issue making it clear that they don’t see this possibility due to the total control of the Moroccan Monarchy and the Mahzen (the deep state) over the Moroccan population and the political movements. The absence of a true democracy, the lack of fundamental rights will never allow a dialogue.

First you have to understand that Morocco is a third World country.

A feudal dictatorship, where there is not even the minimum of a democracy where there could be a dialogue with the Moroccan political parties about this issue in case, of a negotiation with the Saharawi people.

It is not possible neither to negotiate nor to have a dialogue with the Moroccan feudal dictatorship.

Because it is a country that has no and does not respect the fundamental rights, the human rights.

Morocco is an invasion force that occupied the territory, that means that it violated clearly International Law and trampled on it.

Therefore, the only solution is a total and complete withdrawal.

Can dialogue end Moroccan illegal occupation and ensure the right to self-determination?

Could dialogue between civil society in both Morocco and Western Sahara served to resolve the conflict over Africa’s last colony and establish peace and stability in the whole region?

Saharawi Committee to defend the right of Self-determination has a point here.

As a Saharawi blogger , I think that there seems to be no peace in sight

Between the Saharawi people and Morocco

Because the Moroccan occupier is stalling since a long time to win some time, while the International Community does not care.

We, Saharawi do not see a light at the end of the tunnel.

We, the Saharawi people really don’t wager on the Moroccan people, because it is a weak-willed people and does not have the capacity for change, because Monarchy controls everything and has interests with France.

France and Spain control the issue.

Both are stalling to serve their own bet interests

Unfortunately, the International Community and the UN Security Council erode confidence in the system and that is what Morocco wants. The Saharawi people is betting only on its willpower. The Saharawi do not exclude that the vast majority of the Saharawi want to get back to the fight to end the occupation and get independence.

Actually, Moroccan political parties, political figures have advanced attitudes particularly with regard to self-determination but we cannot rely on them because they are a minority and their voices are not heard in Morocco. El Mahzen (the deep state) is dominating political opinion and future of the Moroccans.

Can dialogue end Moroccan illegal occupation and ensure the right to self-determination?

Could dialogue between civil society in both Morocco and Western Sahara served to resolve the conflict over Africa’s last colony and establish peace and stability in the whole region?