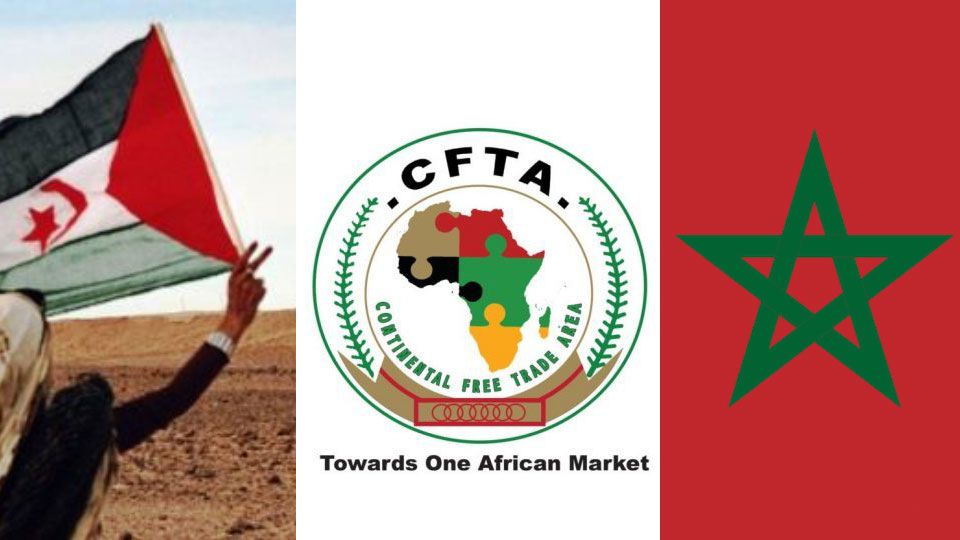 The AU says that the AfCFTA  will create the world’s largest free trade area and lead to around a 60% boost in intra-African trade by 2022.

Morocco ratified the agreement but Nasser Bourita, Minister of Foreign Affairs and International Cooperation of the Kingdom made immediate statements saying that although they ratified the AfCFTA, “Morocco’s signature and ratification of the agreement must be seen as separate from its stance on the self-proclaimed Sahrawi Democratic Republic (SADR)”.

The ratification of the AFCFTA does not mean that Morocco will respect what it has signed because it will continue to want to exploit and commercialize illegally obtained products and resources from the occupied territories of Western Sahara.

The arguments presented are internal propaganda for Morocco, a country immersed in a profound social and economic crisis. Western Sahara is used as a “unity factor” and Polisario Front and Algeria seen as the enemies who “attack” the kingdoms territorial integrity.

We recall that the only one attacking other countries “territorial integrity” so far is Morocco who invaded Western Sahara in 1975 and continues to occupy it and the Sand War that was a border conflict between Algeria and Morocco in October 1963, when the Moroccan government claimed to be entitled to portions of Algeria’s Tindouf and Béchar provinces. The Sand War led to heightened tensions between the two countries for several decades.

The now ratified AfCFTA is clear in its terms, relying on the laws of the African Union and the Constitutive Law, which is unequivocal on the borders of countries and respect for the inherited frontiers of colonial times.

Morocco who adhered to the African Union in 2017, did so disrespecting the very Constitutive Act it signed, by being an occupant of a territory over which it has no sovereignty according to International Law, the European Court of Justice, the United Nations and the African Union.

The other statement made by Minister Bourita was that a country who has not its own currency could not have trade agreements and that Western Sahara would have to use  Algerian Borders to export and trade. According to Bourita, an obstacle to trade.

This statement has several flaws that cannot been explained by “lack of information” on the Minister’s side, since he surely looked at least once at a Map of the African continent where he could clearly see that Western Sahara has three borders by Land: Morocco, Algeria and Mauritania, whilst Morocco has only two: Western Sahara and Algeria. Morocco is so “forced” to cross Algerian and Saharawi borders to export by land to other African countries.

Regarding the currency we have to point out that there are 12 Countries that don’t have a currency of their own and instead use another country’s currency and many dependent territories who do so also. All of them have some kind of trade agreements.

You do not need to be versed in legal issues to realize that the statements of the Moroccan chancellor, denying the existence of the Saharawi Republic, its goods and products; they only seek to divert attention from the following facts:

We want to remind the Minister of Foreign Affairs of the Kingdom of Morocco, a state party along with the SADR in the agreements and agreements of the OAU / AU, including the Free Trade Agreement that Morocco is legally bound to it by the following:

First. The name of the King of Morocco is listed along with the name of the President of the Saharawi Republic on the list of heads of state, on the first page of the document of the Constitutive Act of the African Union.

Second: according to the provisions of article 4 of the Act, in paragraphs A, B, F and J, Morocco undertakes

(a)  sovereign equality and interdependence between States members of the Union.

(b) respect for the existing borders in the achievement of the  independence.

Third. In accordance with the 2016 Kigali (Rwanda) Declaration on the launching of the African Free Trade Area, the Member States have committed, in the Preamble to this Declaration to:

“the total regarding what has been negotiated and agreed upon in the legal texts related to the Free Trade Zone,”.

Fourth. In Annex 2 of this Free Trade Agreement, specifically in Article 1, paragraph (f), the States Parties, with respect to the Rules of Origin, undertake to:

Fifth. The Vienna Convention on the Law of Treaties of 1969 states in article 26 that the contract is the right of the contracting parties and that “each treaty is binding on its parties and will be applied in good faith”

It also recognizes in article 29 that the treaty “applies only in the territorial area of the State party”. “

This is by far not the first agreement or covenant that Morocco ratifies with no intention to oblige to its content and rules.

Even the partnership agreement with the EU is not respected by not complying with the respect of Human Rights a fundamental issue of the base of the agreement.

So why does Morocco sign and ratify treaties, agreements, covenants with no intention to respect them?

One of the reasons one could argue is the propaganda effect it has inside Morocco and also abroad, portraying a reality that is far from being true: a modern and developed state where Human Rights and Law are respected.

The other reason might be the fact that all these ratifications give the International Community the “basis” to make new agreements and say that Morocco is “developing efforts”.

The ratification of the Convention against Torture for instance and the put in place of a NPM (National Preventive Mechanisms) allows Morocco to profit from economical support and incentive from the European Union under the Human Rights umbrella. The NPM, in this case the Moroccan Human Rights Council (CNDH) though does not fulfill its role and acts as an extension of the Government lacking independence.

Morocco also sees itself as the main “partner” and as a door/bridge to African countries for some European and Western Countries, advocating that it is the only country with the necessary stability.

Another fake news since the number of Moroccan terrorists in the attacks in Europe are known, the huge volume of production of narcotics and narcotraffic, the internal conflicts in several regions, the use of migrants as pressure tool against Europe and the continues diplomatic strain with its main neighbor are public.

A recent  wide-ranging BBC survey shows almost half of Moroccans are considering emigrating and want immediate political change.The wish for change is not only economically motivated but rooted in a deep desire for freedom and human rights respect.

Will Morocco continue to ratify treaties it is already violating at the act of signing? Probably yes since the International Community seems unable or unwilling to put pressure on Morocco to respect the law. The most recent example is without any doubt the maneuvers made by the European Union to circumvent the ruling of the Court of Justice of the European Union, regarding the fishery and agricultural agreements Morocco/UE. The court ruling was clear concerning the status of Western Sahara and the illegality of any exploitation, trade and manipulation of resources originating from the occupied territories by Morocco without the express consent of the Saharawi Population, and therefore their legal representative Polisario Front. The European Union though took it upon itself to interpret “Saharawi population” as “Population in the territory” which includes the Moroccan settlers who are the majority, and so ratified agreements that are illegal.

The Polisario Front is still in Court and will not stop to try to see their rights respected.