The Children of Occupied Western Sahara live under constant terror

On the 16 November 2020, three days after the resumption of war between the Polisario Front and the illegal occupying forces of Morocco, 12 year old Hayat (surname withheld due to constant threats against her family) was abducted by Moroccan security forces.

by Vita Angula and Isabel Lourenço

Hayat’s “crime” was that she drew a picture of the Sahrawi flag on her school smock (uniform)!

Hayat’s story is similar to many other minors in Western Sahara who live under constant terror of Moroccan Commando groups and police who have escalated their level of brutality within the occupied territories since the breakdown of the cease fire and the resumption of war on the 13 November 2020.

Hayat was brutally assaulted by forces of the Moroccan regime, when teachers at the school she attended reported her for the perceived ‘transgression’. 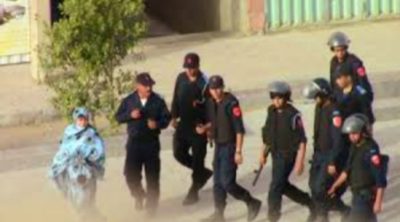 To ensure total subjugation, the security forces forced her to kneel and sing the national anthem of Morocco whilst kissing the image of Mohammed VI, the King of Morocco.

These occurrences which include arbitrary detentions have become increasingly prevalent since the end of the ceasefire!

However, due to the media blackout that Morocco has instituted within the occupied territories, the world has yet to get a full glimpse of the human atrocities currently being carried out by the Moroccan regime.

A regime that is propped up by European interests such as France and Spain who maintain economic ties and continue in the plunder of Western Sahara’s natural resources in violation of a European Court of Justice (ECJ) ruling that trade deals between Morocco and the European Union (EU) do not extend to Western Sahara. 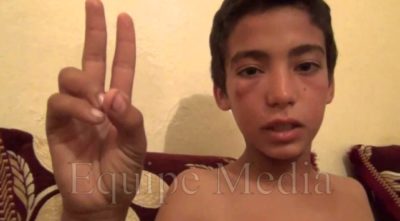 The deafening silence of the African Union (AU) is even more worrying because the Human Right’s Atrocities currently taking place with the occupied territories of Western Sahara fly in the face of the AFRICAN CHARTER ON THE RIGHTS AND WELFARE OF THE CHILD.

According to Article 3 of the Charter, to which the Sahrawi Arab Democratic Republic (SADR) is a signatory “every child shall be entitled to the enjoyment of the rights and freedoms recognized in this charter irrespective of the child’s or his/her parents’ or legal guardians’ race, ethnic group, colour, sex, language, religion, political or other opinion, national and social origin, fortune, birth or other status’.

Morocco is not a signatory to the African Charter but has nonetheless ratified the UN Convention for children’s rights which holds the same principles and values. 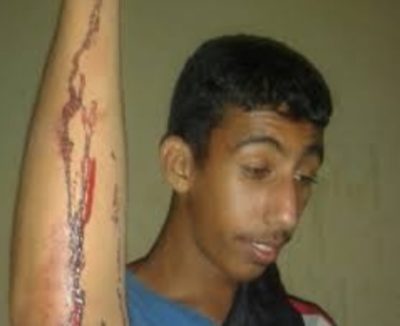 The children in the occupied territories do not enjoy these rights and Hayat’s rights were violated to the extent that she will have to live with this traumatic experience for the rest of her life.

All these transgressions of the AFRICAN CHARTER ON THE RIGHTS AND WELFARE OF THE CHILD are violated by Morocco in the occupied territories of Western Sahara and the world can no longer remain silent.

Africa can no longer remain silent! 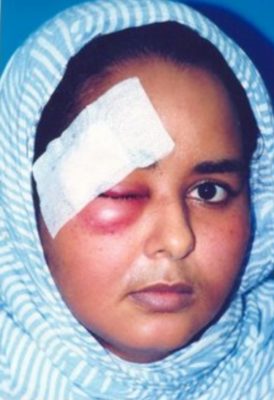 “The Universal Declaration of Human Rights and the United Nations (UN) Convention on the Rights of the Child as well as the International Humanitarian Law are violated daily in the occupied territories”.

According to a report authored by Isabel Lourenço published in 2019 titled: ‘Saharawi Children and Students under occupation’ “Saharawi children are exposed to daily violence in direct and indirect forms. Abductions, torture, day and night raids, detentions of themselves or family members, friends and neighbors.

We are never safe, not in school, not in the street and not even at home. They can come any moment and take you or beat you. In school they insult us, beat us, they want us to think we are stupid, useless, that Moroccan children are better. Some of the Moroccan children behave the same way as the adults; they are never punished when they are bad to us. I can’t sleep, I always have things in my head and in my heart; sometimes my heart beats so fast I can’t breathe”.

These are the lived realities of children in occupied Western Sahara!

The Universal Declaration of Human Rights ant the UN Convention on the Rights of the Child and the International Humanitarian Law are violated daily in the occupied territories, where the absence of a UN protection mechanism, UNICEF or the International Red Cross leaves the Saharawi population and, in this case, the younger generations at the whims and mercy of the Moroccan settlers”

Torture, humiliation, physical and psychological attacks and violent discipline are the life stories these children have to share.

As the world grapples with a global pandemic we ought to remind ourselves that on the Northern West of Africa a gross human right’s catastrophe is taking place.

The world and Africa cannot afford to remain silent anymore and a global pandemic cannot be used as an excuse to turn a blind eye at the human rights atrocities taking place in the desert territory of Western Sahara.

by Vita Angula and Isabel Lourenço

Vita Angulais a socio-political commentator and independent columnist based in Namibia. He is also the Founder and Editor of online Newsletter, Vitalio’s Newsletter. He can be reached at [email protected])

Isabel Lourenço is a Human Right’s expert on Western Sahara and Author of the report: Saharawi Children and Students under occupation published in 2019 by CEAUP. She can be reached at [email protected]

China: O início do fim do “pacto do regime”