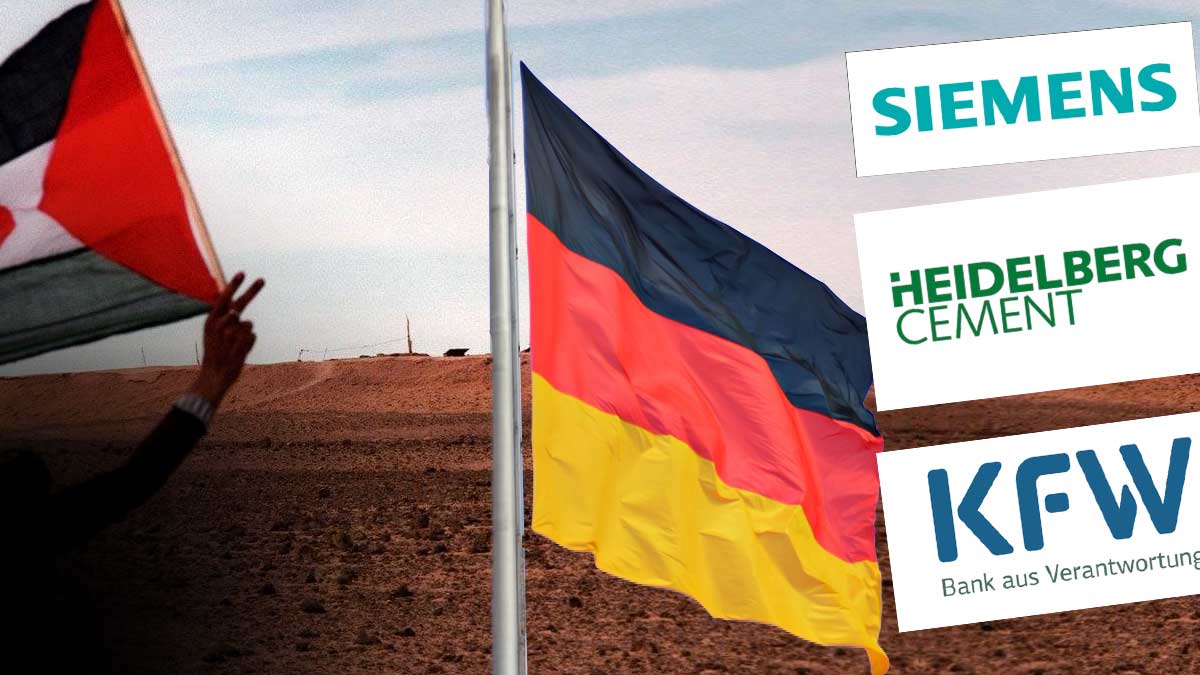 Companies that operate in occupied territories are not neutral actors. Their business activities work towards the status of the occupation and make it a profitable business.

Cimsud  company which operates a grinding unit in El Aaiun (occupied Western Sahara) with a capacity of 500,000 tonnes is now owned by a subsidiary of Heidelberg Cemen. One German Company more that operates in the occupied territories in violation of International Law.

Ciments du Maroc, a subsidiary of HeidelbergCement (German Company), is the 2nd cement manufacturer in Morocco and the leading operator in ready-mixed concrete and aggregates.  On May 4, 2020, Ciments du Maroc finalized the acquisition, from the Anouar Invest Group, of the companies Atlantic Ciment and Cimsud following an agreement signed on July 26, 2019.

The agreement concluded with the Anouar Invest Group related to the acquisition by Ciments du Maroc of 100% of the capital of the following companies:

Atlantic Ciment: company which carries out the project of construction and exploitation of an integrated cement production plant in the province of Settat; and Cimsud  company which operates a grinding unit in El Aaiun (occupied Western Sahara) with a capacity of 500,000 tonnes. The factory of Cimsud in the occupied territories was constructed by Thyssen Krupp, another German Company.

This is the latest information concerning new German economical activities in occupied Western Sahara but there are other companies such as:

DHL Express sa Morocco (DHL Express) opened a branch in the city of El Aaiún, capital in Western Sahara in 2016. DHL Morocco is a subsidiary of DHL International GmbH, a parcel and Mail Express service, is part of the Deutsche Post DHL Group based in Bonn. KfW Bankengruppe holds around 254 million shares in Deutsche Post AG, which corresponds to 20.5% of the share capital.

Last Week, Maria Flachsbarth, Parliamentary State Secretary in the Federal Ministry for Economic Cooperation and Development sent an answer to a question raised by MP Maria Schreiber from the “Die Linke” concerning the geographic spending of a credit accorded to Morocco’s state-owned phosphate company OCP SA by the KfW, as published by WSRW.

The answer is very clear: “The existing contracts for the above-mentioned development credit explicitly exclude the financing of economic activities in Western Sahara.“

KfW Bankengruppe is so implicated directly and indirectly in economic activities in Western Sahara that support the illegal occupation of the territory.

In April 2017, the former wind power division Siemens Wind Power merged with the Spanish wind turbine manufacturer Gamesa Corporación Tecnológica to form Siemens Gamesa Renewable Energy S.A. based in Spain. Siemens AG holds 59% of the shares in the company and is therefore involved in controversial wind farm projects in Western Sahara due to its business activities prior to the merger.

As part of the collaboration with the Moroccan energy company Nareva, a 100% subsidiary of the National Investment Company SNI (Société Nationale d’Investissement), which in turn is 75% owned by the Moroccan royal family, Siemens is not only active in Morocco, but also Involved in the construction of wind farms in Western Sahara. The oldest one operating in Western Sahara is Foum El Oued which is in operation since 2013, a joint project with the Moroccan energy company Nareva.

The data published by WSRW tell us that a total of 22 Siemens wind turbines provide 95% of the electricity there for the mining of phosphate in the Bou Craa mines, as well as for the transport via a 100 km conveyor belt to the port and the cleaning of rocks.

All these companies pretend to “be socially and environmentally responsible”, yet they are in violation of International law, support an occupation regime, human rights violations and disrespect the  ruling of the European Court of Justice, that clearly state that Morocco has no sovereign rights over the territory of Western Sahara. The approval of the Sahrawi people is therefore essential for all economic activities and none of the above-mentioned companies has this endorsement from the Saharawi.

The “greenwashing[1]” of Siemens and the pretend “Social responsibility” of these companies are known. In fact, if we consult their websites and marketing leaflets all seem to be very “responsible”, the truth is however very different. When inquired by NGO’s, Saharawi activists, MP’s and others they give lame excuses and explanations.

The Moroccan settlers are increasing by the day and occupy the vast majorities of all jobs. It is through the job opportunities and the tax and income benefits that the Moroccan Government attracts the Moroccan citizens to the occupied territories. The majority of the Saharawi population though has no jobs, highly qualified young saharawi are unemployed and denounce the apartheid policies that the Moroccan regime uses to achieve forced impoverishment and social and economic discrimination of the Saharawi population.

In the Country Reports on Human Rights Practices for 2018 – Western Sahara, the Bureau of Democracy, Human Rights and Labor of the US Department of State confirms that Morocco is committing and ongoing of the Practice Relating to Rule 130 of International Humanitarian Law: Transfer of Own Civilian Population into Occupied Territory. This violation constitutes a War Crime.

As an inducement to relocate to the territory, workers in the formal sector earned up to 85 percent more than their counterparts in internationally recognized Morocco. The government also provided fuel subsidies and exempted workers from income and value-added taxes.”[2]

In the report “International law aspects of the Western Sahara conflict” dated March 2019, of the Scientific services of the German Bundestag we can read:

It can thus be stated that the Moroccan government’s settlement policy of its own nationals in the Western Sahara region violates Article 85 (4)in conjunction with Art.  49 parag. 6 of the IV Geneva convention and, at the same time, a violation of the prohibition on the transfer of part of one’s own population to occupied territories, which is standardized in Art. 49 parag.6 of the 4th Geneva Convention and also established under customary law.”[3]

The workers in the German companies operating in Western Sahara all have Moroccan identity cards. The Moroccan regime after the invasion of the territory forced the Saharawi to have Moroccan nationality, so it is easy for the Administrations of this companies to pretend to have a great number of Saharawi in their employment, which does not correspond to the reality.

During official visits the Moroccan regime presents “Saharawi Indigenous people” in traditional clothing as representatives of the Saharawi population, attributing them a role they don’t have. As well as associations with “Saharawi” in the name.

This leads us to two observations:

[1] Greenwashing is the practice of making an unsubstantiated or misleading claim about the environmental benefits of a product, service, technology or company practice.